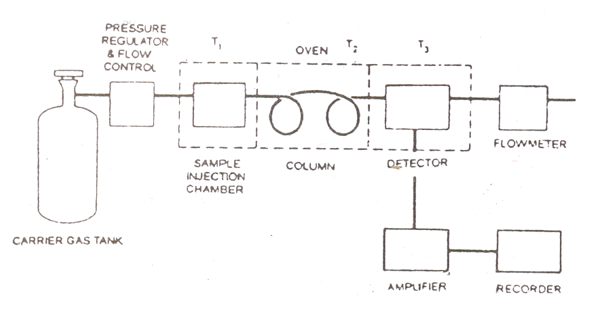 In the Gas Chromatography process, the sample is converted into gas form if it is not initially gas form by heating separately in heating blocks. This gaseous form of the sample is then mixed with the inert gases which may be N2, H2, He, or Ar. But H2 is avoided as it is highly explosive. The carrier gas and compartment of the sample are then injected into the instrumentation which contains a stationary phase either solid or liquid. The component of the sample will be retained at the different positions in the stationary phase.

It means with the help of Gas Chromatography qualitative, quantitative, and separation of the mixture is also possible.

How does the Gas Chromatography GC work?

In this tank carrier gas for e.g.:- He, N2, Ar, or H2 is present under high pressure. The carrier should be inert, non-reactive, and available in a pure state. A carrier gas is selected on basis of the detector used.

The flow of the carrier gas is controlled, as it is attached to the carrier gas tank. The pressure usually maintained is 10-50 pounds per square inch with a flow rate of 25-40 ml min-1.

The sample is injected through a silicon rubber septum. The sample size is of order 0.01 to 10 µdm3over sized sample causes broadening of peak. The temperature of the unit is maintained at 60º C above the normal boiling point of the sample.

The columns and packing used in Gas-Liquid Chromatography are

Capillary column is coated with a very thin film of liquid stationary phase, they are of length 100-300 meters, Theoretical plates are of tune-up to several hundred thousand. Packed columns of glass or metal tubes of 1-8 mm diameter and 2-20 m in length are coiled and a number of theoretical plates are about 20,000 or more.

Ideal liquid to be used as liquid stationary phase should be

Solid adsorbents are used as stationary phases in the column. For eg Carbon in different varieties is used. Zeolites have defined open structures with holes, hence used for separation of the sample depending upon the size of the sample. Ion exchange resin and some complex inorganic salts can also be used in a few cases.

It is the device present at the exit of the column. It measures the amount eluted out by carrier gas. The temperature of the detector component must be high to prevent

the condensation of the sample vapours and at the same time, the sample components should not be decomposed. The commonly used detectors are —

The output of the detector is fed into the signal recorder. The results of the signal are recorders give qualitative and quantitative analysis.

The sample injection components’ chromatographic column and detectors must be constant and the components must be in the gaseous form.

Suppose the mixture contains three-component A, B& C.  If this mixture is liquid then it is to be preheated in the heating blocks, so that it must be converted into a gaseous form. At the same time, the carrier gas is allowed to flow with pressure from the carrier gas tank. The flow of the carrier gas is to be regulated by the flow regulator and is then mixed with the sample vapour with the help of a rubber septum by syringe.

It is injected into the head of the column. As the mobile phase move from one end to the other end retention or adsorption takes place on the stationary phase which may be solid or liquid. The gas which comes out from the column is only carrier gas.

Now, we have to pass another carrier gas which is known as eluent. The least retained component is eluted at first. Suppose C will be eluted first and last will be A. If we plot a graph of signal recorder vs. time. The graph is consist of peaks. The no. of peaks corresponds to no. of the components. From the retention time, tR. We can identify the component. The concentration of each component is the area of each peak.

=>     The B.P. of benzene is 80.1 0c & cyclohexane is 80.80c. If we have the mixture of two which are miscible then by using any efficient distillation kit we can not separate the miscible mixture as the difference in the boiling point is just 0.70c. The mixture of the two can be separated & analyzed by Gas Chromatography.

=> Radioactive products can be analyzed by Gas Chromatography.

=>     Reaction mechanism can be studied with the help of Gas Chromatography.

=>     With the help of gas chromatography, we can analyze the body fluids within a few minutes which may result in the complete diagnosis of the body.

=>     The mixture of primary, Secondary & tertiary amines can be separated by mixing the mixture with 2, 4 – dinitrofluoro benzene in Gas Chromatography.

=>     Natural products can be analyzed and new compounds can be synthesized.

=>     Separation of hundreds of hydrocarbons in petroleum is possible by Gas-liquid chromatography.

It is also known as a katharometer.

It contains two identical brass cells. The cells contain fine platinum wire. Effluent from the column flows through one cell and carrier gas through another cell. Wires are heated by the current through the accumulator.

As long as there is no sample gas the resistance of the wire will be the same but whenever the sample component is eluted with carrier gas there is heat loss which unbalances the bridge & gives rise to deflection in galvanometers. The signal on amplification causes the pen to move on a strip of moving graph.

The detector is simple inexpensive & accurate but it is not extremely sensitive to another gas.

When an organic compound is burnt in an air–hydrogen flame at the temperature of the flame, ions are produced. These ions produced in the flame are collected and the resulting ion current is measured Magnitude of the ion current produced is proportional to the no. of carbon atoms reduced.

Even though the response is proportional to the no. of carbon atoms entering the flame those which are already completely ionized do not respond to ion formation. The detector is insensitive to most the inorganic compounds including air and water.

The temp range is kept between 10 and 420oc when only pure carrier gas has been introduced to the flame, due to negligible ionization low current levels are observed. Most of the organic compounds are from ions in the flame

when the carrier gas is mixed with the compound molecule extent of ionization increases. The ion current increases which after amplification is fed to the recorder.

It works on the principle that the carrier gas can be ionized by means of a radioactive source into electrons. The ionization involves the formation of the ion pair. These electrons move towards an anode under a fixed voltage. This constitutes a steady current when only carrier gas is present.

When carrier gas is mixed with an electron capturing molecule of sample in the detector it absorbs some electrons which results in the reduction in no. of electrons and cause a drop in the standing current. The drop in current is directly proportional to the concentration of components in the sample. The drop in the current is amplified & recorded.

ECD is insensitive to amine, alcohols, and hydrocarbons but is very sensitive to halogen anhydride, and nitrile. Organometallic which has an affinity for electrons.

The column is made up of a variety of materials including glass metal such as copper, Stainless steel or it may be made up of organic polymer. The length of the tube varies from a few cm to 100 meters. The internal diameter of the tube is 4mm. The column is in the form of a spiral and is filled with silica gel or alumina or activated carbon or molecular sieves are used for G.S.C.

For G.L.C. the column is filled with a mixture of ethers and esters or hydrocarbons of high molecular weight. These liquids are supported by elite or glass beds in some cases. Greases and silicone oils can be used as a stationary phase.

It is defined as the time taken by the component to move over the entire length of the column and hence to come out of it. Retention time depends on the nature of the stationary phase, mobile phase, flow rate, and column temperature chemical constitution.

Under a given set of conditions, retention time is characteristic of a given compound.

It is also used for the identification purpose. VR   =  tRF

Retention Volume is defined as the total volume of the mobile phase required to elute the component completely from the column. It is the characteristic of the component. It is given by equation.

When the solute peak maximum appears at the column exit, one-half of the total solute has eluted in retention volume while the other half remains in the mobile and stationary phase in the column.

It is characteristic of compounds and hence used for identification purposes.

tR1ad tR2are retention times for components 1 & 2 respectively and W1&W2 are peaks at the base. For a good separation values of R should be greater than 1.5

What is Height equivalent to a theoretical plate (HETP) in Gas Chromatography?

Where  L –  length of the column. b – no. of theoretical plates.

What elutes first in Gas Chromatography?

When to use Gas Chromatography?

For qualitative, quantitative, and separation of the mixture.

What is GC? or What is the full form of GC?

It is Gas Chromatography.

It is High-performance liquid chromatography.

What does gas chromatography separate based on?

In Gas Chromatography separation was observed based on differences in boiling points and polarity of components.