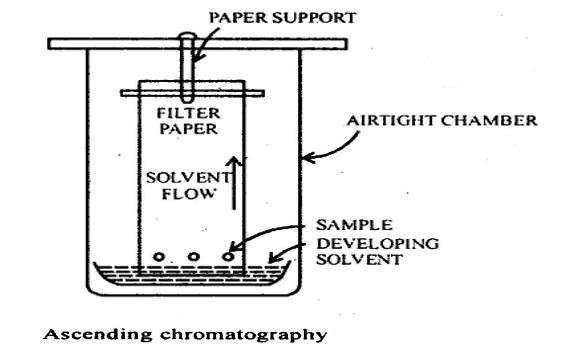 Chromatography is a separation technique whereby the components of a mixture may be separated by allowing the sample or analyte to pass over the material called a stationary phase by a moving phase called a mobile phase.  If the individual components of the mixture move at different rates then the separation will occur and the degree of separation the difference in migration.

On the basis of the phases involved

On the basis of physical principles involved

Chromatography can be divided into four different groups on the basis of physical properties involved,

Principle of thin layer chromatography (Tlc principle) – What is Tlc?

In the thin layer chromatography technique (TLC) the stationary phase is in form of a thin layer of solid coated on the surface of a glass or metal or plastic plate called chromatophore.  The sample is dissolved in a suitable volatile solvent and applied to the plate.  The sample is then allowed to move along by the thin layer, by introducing the plate in another solvent that acts as a mobile phase.

The separation of components occurs due to adsorption or partition in a thin layer of solvent present on the solid.  The resolution of the sample depends on the relative movement of individual components.  To compare the relative movement of different solutes term retardation or retention factor is introduced.   It is represented by Rf.  Retardation or retention factor is defined as the ratio of the distance traveled by the solute front from the original line to the distance traveled by the solvent front from the origin line under the given set of conditions.

The practical aspects of TLC are as follows.

Preparation and application of sample:-

Detection of the separated components:-

Evaluation of components is carried out on the plate directly by any one of the methods given below:-

a. Visual comparison of the spot:-

b. Measurement of the area of the spot:-

B] Indirect or Elution method:-

The spot of the substance on the chromatogram is eluted in a minimum amount of suitable solvent.  The solution is diluted or concentrated and then analyzed by a suitable instrumental or non-instrumental method.

In paper chromatography, the liquid mobile phase containing solutes is passed over the porous paper, which contains a stationary liquid phase (usually water).

2) The resolution of components occurs due to partitioning between two phases.

3) The rate of distribution and effective separation depends on the partition coefficient of individual solutes between two-phase.

The Rf  value of a substance depends upon a number of factors are as follows,

Rf is a function of the partition coefficient. It is a given substance, provided other experimental conditions like temperature, type of paper, duration and direction of development, etc. Are kept constant. Keeping the above factors constant it is possible to compare the Rf value of different substances. For eg. If ds is the distance traveled by solvent front from the original line, and dA and dB are the distance traveled by substances A and B, then their respective Rf values are given by,

This Rf value can be used to identify the component of the mixture.

In some cases, the solvent front runs off the end of filter paper, the movement of a substance in such cases is expressed as Rx but not in Rf value.

The practical aspects of paper chromatography are as follows

The original work of paper chromatography was carried out by using Whatman filter paper no. 1.  Nowadays papers of different grades that differ in thickness and density are used.  The grade of the paper depends on the loading and rate of flow of solvent.  The paper can be modified in different ways for paper chromatography.

Preparation and application of sample

About 0.1 to 1% solution of the sample is prepared in an organic solvent of low B.P. A paper about 15cm in length and 5cm in breadth is generally used.  A horizontal line is drawn on the paper with a pencil in such a way that it will remain about 1cm above the solvent level.  The spot is applied on the line by means of a capillary or micro syringe. The width of the spot is about 0.5cm and the distance between the spot is about 2cm.  The spots are dried by hot air or an IR lamp.

1) The solvent or a mixture of solvents used as the mobile phase should be saturated with water.

2) The solvent should be cheap, pure, and not highly volatile.

4) The solvent should not react with the sample and the composition should not change with time.

Development of the chromatogram

The development of the chromatogram is carried out in a tank or vessel with a well-fitted lid to prevent the escape of the solvent vapours and to establish equilibrium between liquid and vapours.  The chromatogram can be developed in different ways as given below.

The development of the paper is done by allowing the solvent to travel in an upward direction.

The solvent is placed on the bottom of the tank.

The sample applied should be a few cm from the bottom edge of the paper.

The paper is either suspended from a hook in the solvent or rolled in a cylinder held together by clips and placed insolvent.

The mechanical weakness of the wet paper limits its size of the paper.  Also, there is a limit on the height to which the solvent can rise.

In Descending Chromatography, the Development of the paper is done by allowing the solvent to travel in a downward direction.

This method is used when Rf values of components of the mixture are very low or very close.

The process is carried out in a well-sealed tank with a through filled with solvent or mobile phase.

The sample is applied to a paper & the paper is introduced into the tank.

The upper end of the paper is immersed in the trough containing solvent.  The flow of the solvent starts with capillary action and is continued by gravity.  The length of the paper regulates the distance moved by the solvent front, hence proper resolution is obtained.

Radial Chromatography is a horizontal method of development.  The process is economical and better separation is achieved.  The sample spot is placed near the center of the circular filter paper.  Two Petri dishes are placed on one another in a tank.  The lower dish is filled with solvent.  The paper is held horizontally and sandwiched between the edges of the Petri dishes.  A radial strip cut to form a wick is connected at the center and the other end of the wick dips in the solvent present in the lower dish.  The solvent is allowed to move radially towards the periphery and the components are spread into a series of concentric bonds.

In the case of compounds having simpler chemical constitutions, such as amino acids, the Rf values of components of the mixture are very close, and proper separation is not possible.  In such cases, two-dimensional chromatography devised by Martin is applied.  In this method, a square sheet of paper is used.  The sample is applied at one corner.  The edge of the paper AB is immersed in the solvent and the development is carried out.  This gives partial separation of the components. The sheet is removed, dried turned to 900, and put in another tank with edge AC immersed in another solvent. The development with this solvent gives the separation of the components.

Detection of the separated components

The components which are coloured can be easily detected however in most cases they are colorless hence various methods are used for detection as given below :

Identification of the component is carried out by comparing the Rf value of the sample and the standard.  The quantitative

A).  Direct Method:-  Evaluation of component is carried out on the paper  directly by any one of the methods given below:

B) Indirect or Elution method:-  The spot of the substance on the chromatogram is out and soaked in a minimum amount of suitable solvent. The solution is diluted or concentrated and then analyzed by a suitable instrumental or non-instrumental method.

Advantages of TLC over paper chromatography:-

What is ion-exchange chromatography?

Ion exchange chromatography is used for the separation of ions of similar properties which are very difficult to separate by another method.

What is High-performance liquid chromatography or HPLC?

High-performance liquid chromatography or high-pressure liquid chromatography ie. H.P.L.C. is an improvement of classical column liquid chromatography. In classical methods, the liquid mobile phase flows slowly by means of gravity through a relatively large diameter column packed with a stationary liquid phase, which is immobilized on the surface of solid-like alumina, get, etc. of different mesh or particles size. The classical method is time-consuming and tedious and is generally characterized by low column efficiency and long separation time. In HPLC this efficiency of separation is improved by using a high-pressure pump that is capable of producing pulse-free inlet pressure of 1000 – 6000 psi.