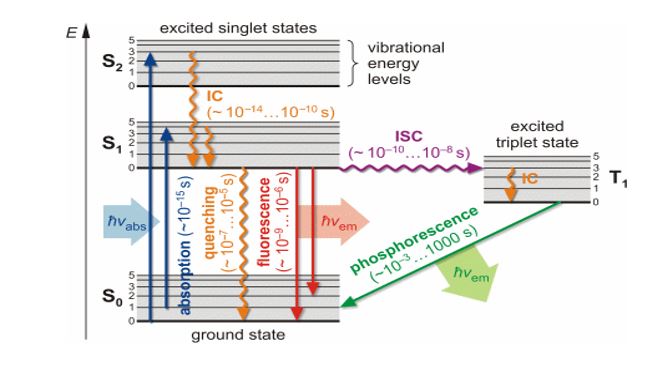 An excited molecule comes back to the ground state by emitting an absorbed light in the form of U.V light or visible light photon. This process is called Fluorescence.

Initially, the molecule is present in the ground state and present in vibrational energy level no.0 as it has minimum energy.

a) Molecule may return to ground state without emitting light radiation due to loss of excitation energy in the form of collision.

The excited singlet state has less energy and thus the electron remains in the excited state for some time and comes back to the ground state. Thus the emission is delayed. This process is called is phosphorescence.

The difference, between fluorescence Vs Phosphorescence

The relation between the intensity of fluorescence F, and the concentration of the

Fluorescence substance C can be established as follows,

Where,   F=intensity of fluorescence radiation

From the above equation, it follows that fluorescent intensity is practically proportional to the concentration of the fluorescent substances.

1) There is a π to π * transition in the above processes. Hence molecules with a conjugated system of double bonds or functional groups containing nonbonding or lone pairs of electrons such as – OH, -NH2 show fluorescence and phosphorescence.

2)  Electron withdrawing groups such as COOH. – NO2, halogens decrease fluorescence and phosphorescence.

3)  The pH of the solution affects the processes because ionization decided whether the molecule will show fluorescence or not e.g. phenol does not exhibit fluorescence but phenoxide ion shos fluorescence.

What is Fluorimeter? or Fluorimetry principle

It is the instrument for measuring the intensity of fluorescent light.

Following are the applications of Fluorimetry

1)  In the detection of metal ions: Certain metal ions form fluorescent complexes with organic reagents. They can be detected by this method. e.g. Al, Be, Zn with 8-hydroxy quinoline, ruthenium with 5-methyl-1, 10-phenanthroline, uranium with NaF.

2)  Quantitative analysis:  Boron forms a fluorescent complex with benzoin. This property can be used in its quantitative estimation.

3)  Fluorescent indicators:  The intensity and colour of certain fluorescent substances such as eosin depend on pH. They can be used in acid-base titration, the titration of coloured solutions.

5)  Organic and biochemical analysis:  Estimation of vitamin B1, steroids, enzymes forms fluorescent products which can be estimated from food products, pharmaceuticals, and clinical products.

What are Fluorimetry and Phosphorimetry?

11 thoughts on “Molecular fluorescence and phosphorescence spectroscopy | Fluorimetry and Phosphorimetry – instrumentation, and applications |”