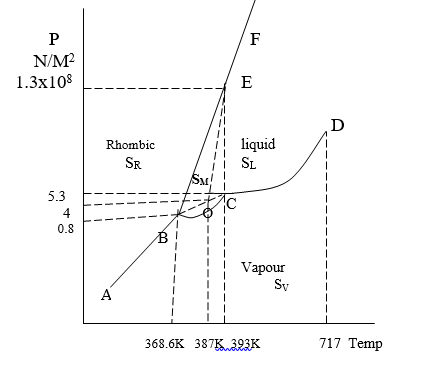 The phase rule is an important generalization dealing with the behavior of the heterogeneous system.

It is possible to predict qualitatively by means of a diagram the effect of changing pressure, temperature, and concentration at equilibrium.

A phase is defined as homogeneous, physically distinct, and mechanically separable parts of a heterogeneous system.

The phase should have a definite bounding surface.

Each phase can be separated from every other face by filtration, decantation, handpicking of crystals by shape and color, separation of one immiscible liquid from another using a separating funnel.

It is the number of physically distinct states viz. solid, liquid, and gaseous present in the system at equilibrium.

A mixture of two or more complete miscible liquids is considered a single phase as there is no surface of separation between them. Thus, alcohol and water will form one single phase.

A mixture of two immiscible liquids such as water and carbon tetrachloride will form two-phase and in addition, there will be a vapour phase.  Under certain conditions of temperature and pressure thus there will be three-phase.

It is the minimum number of independently variable constituents by means of which the composition of each phase.

a) The water system consists of 3 phases i.e. ice, water, and vapour, in equilibrium.  The system can be represented as

Each phase can be represented by one component system H2O.

b)  Decomposition of calcium carbonate:

When calcium carbonate is heated in a closed vessel the following equilibrium system results.

The Number of phases is three but the number of components is only two.

It is defined as the minimum number of variable factors such as pressure, temperature, and concentration which must be specified in order to define the system completely at equilibrium

a) Consider a one-component system existing in one single phase such as a system consisting of pure gas like Nitrogen.

The two variables required to be specific, are temperature and pressure.

Hence it is a bivariant system (F=2)

b) Consider a one-component system having 2 phases that are in the equilibrium of type,

This system will have only one degree of freedom because at a given temperature it has only a fixed value of pressure.

Hence it is a univariant system (F=1)

The system can exist only at a definite temperature and pressure.

Application of Phase Rule to one component system

Description of the Phase diagram

Area:-  The area BOC, COA, and AOB represent solid, ice, liquid water, and water vapour respectively. Thus, within the areas water exists only in one phase.

This curve is inclined away from both the axes indicating that the boiling point of water increases with an increase in pressure.

Curves:- Curve OA is the vapour pressure curve of water which represents equilibrium between liquid water and vapor.

The critical pressure and temperature of the water are 218 atm and 64K at point A.

ii) Curve OB is the sublimation curve of ice, which represents equilibrium between ice and water.

iii) Curve OC is a fusion curve, that represents the equilibrium between ice and liquid.  This curve is inclined toward the pressure axis indicating that as pressure increases the melting point of ice increases.

iv) Metastable state:-  The vapour pressure of the curve of water AC can be continued past the triple point as shown by the dashed line OO’. That is, water can be super-cooled by carefully eliminating Solid particles. The super-cooled water system ice/vapor on the slightest disturbance or introduction a crystal of ice.

At this point, the three phases, ice, water, and vapour are in equilibrium.

Within the areas, BOC [ice], COA [liquid], and AOB [vapour] water exist only in one phase.

Thus, within areas it is bivariant can be completely defined by two variables ie. Temperature and pressure.

Along curves, OA (water  ⇌ vapour) OB (ice ⇌ vapour), and OC (ice ⇌ water) the two phases are in equilibrium, and the degree of freedom is one.

Thus along the curve system is a mono variant, completely defined by one variable either pressure or temperature.

At point O all three phases are in equilibrium with the degree of freedom of Zero. (F=0). Thus point O is non-variant and exists only at a very low pressure of 4.58 mm and a low temperature of 273.0075K.

Sulphur can exist in four phases as

It is also one component system since sulphur is the only individual chemical representing the various phase.

1) Areas: In sulphur system, there are four areas:

i)  Area below ABCD: It contains only sulphur vapour (SV)

The curve is the sublimation curve of Rhombic sulphur where rhombic Sulphur (SR) and Vapour Suphur (SV) is in equilibrium at point 368.6K.

The curve BC is the sublimation curve of monoclinic suphur where monoclinic sulphur and vapour sulphur (SV) is in equilibrium at point 393K.

The Curve BE is the transition curve of Rhombic Sulphur here rhombic sulphur and monoclinic sulphur or in equilibrium.

This curve is inclined away from the pressure axis indicating that as pressure increases the transition temperature of the Rhombic Sulphur also increases.

The Curve EF is the fusion curve of Rhombic Sulphur, here Rhombic sulphur and liquid sulphur are in equilibrium.

Curve CE and EF have inclined away from both the axes indicating that increases in pressure increase the melting point of rhombic sulphur as well as monoclinic sulphur.

Heating Must be gradual for transition to take place but if heating is rapid, the transition cannot take place, curve of rhombic sulphur extends beyond point B till temperature 387K.

If liquid sulphur cooled rapidly along with DC then solid monoclinic sulphur may not appear at point C.

iii) The dotted line EO is the fusion curve of the rhombic sulphur curve is inclined away from both the axes indicating that increases in pressure increase the melting point of metastable rhombic sulphur.

i) The three phases are in equilibrium at point B

Within the areas, ABEF all from sulphur exists in one phase. The degree of freedom    F =2.

Thus it is bivariant and it can be completely defined by two variables such as pressure and temperature.

Along each of curves AB, BC, CD, BE, CE, and EF two phases of one component are in equilibrium.

The degree of freedom F = 1

Thus it is a mono variant and can be completely defined by one variable either pressure or temperature.

At 4 triple points B, E, O, C three phases of one component are in equilibrium.

The system is non-variant and it exists only on particular values of pressure and temperature.

The phases that are in equilibrium along AC are solid lead and a solution of silver and lead.

Thus the system is monovariant.

The phase-in equilibrium along BC is solid silver and lead solution.

The system is mono variant.

The curve AC and BC interest at C, which is called the Eutectic point.

If you raise the temperature above the eutectic temperature the solid phase Ag and Pb disappear and if it cooled below, will land in the solid Ag/Pb area where the solution phase is non-existent.

4) The area above AOC

This region represents the single-phase system, the solution of molten Ag and Pb.

Thus system along AOC is bivariant.

The area below AC represents the phase Pb + solution, while that below BC the phases Ag + Solution.

While below BC the phases Ag + Solution.

The area below temperature 576K represents solid Pb + Solid Ag.  All these areas have two phases and one degree of Freedom

1) The Pb – Ag system has special significance in the Desilverisation of molten argentiferous lead.

2) The argentiferous lead containing a small percentage of silver is first heated to a temperature above 600K.

3) It is then allowed to cool, and the temperature will fall along the line ab.

4) When point b is reached, the lead will crystallize out and the solution will be richer with respect to silver.

5) Cooling is continued, when lead continues to separate out, which is constantly removed by the process of cupellation.

The maximum degree of freedom is possible when P is minimum which is one in and system.

Thus according to the phase rule equation, the degree of freedom having P as one is four.

In order to simplify the graphical representation for three components, the procedure generally adopted is to consider the condensed system, that is the vapour pressure is neglected at a constant temperature, then according to condensed phase rule  F = C-P+1     =      3-1+1 =3

2) Any point situated on any side of the triangle represents a binary system. For example point, P represents 40% C and 60% A

Type I: Formation of one pair of partially miscible liquids.

One pair of partially miscible liquids:

Consider 3 liquids A, B, and C

If two liquids are mixed thoroughly some C dissolve in B and some B dissolves in C and they form two conjugate solutions having their composition represented by points x and y online.  The line x, and y passing through Z1 is called a tie-line.

As more as A is added the tie-line becomes shorter till these merge to a point K.

The limiting values of the misciblities of B in C and C in B in presence of A outside this curve XKY for any composition, the ternary system will be homogeneous and inside the system is heterogeneous.

The curve XKY is called the binodal curve.

The composition of two layers at this point becomes identical and point K is called the plait point.

This is an invariant point.

A point outside the binodal curve XKY represents one liquid layer only.