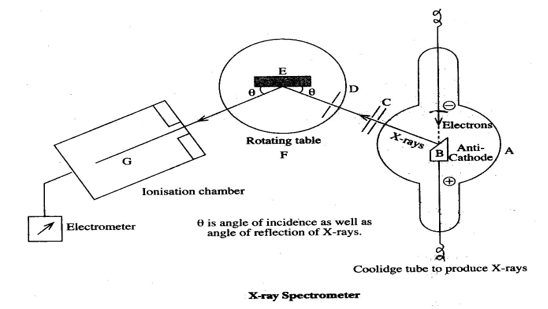 “The shape and size of crystals of a certain compound or element may vary with the conditions under which crystallization occurs, but the angles between the corresponding faces are always constant”.

The term faces are referred to the surfaces which are usually, planar that binds the crystal.  The angle between the two interesting faces is known as the interfacial angle.

For example- NaCl crystallizes in cubic founds from an aqueous solution containing some area and faces like shape if some amount of gum Arabic is present.

a. Plane of Symmetry

b. Axis of symmetry

Plan of Symmetry is an imaginary plane passing through the crystal and dividing into two parts such that one part is the exact mirror image of the other part.

Fig2: Rectangular Planes in a cube

Fig 3: Diagonal Plane in a cube.

Axis of Symmetry is an imaginary line about which the crystal is rotated so that the crystal presents the same appearance more than once in the course of a complete resolution through 3600.

The Centre of symmetry is an imaginary point in the crystal such that any line drawn through it will intersect the surface of the crystal at equal distances in both directions.

Law of rationality of indices

It is possible to choose along the three coordinate axes, unit distances (a, b, c) which may or may not be of equal length, such that the ratio of the three intercepts of any plane in the crystal is given by

The plane ABCD makes an intercept at ‘a’ on the x-axis but is parallel to the y and z axes.

The plane ABCD makes intercepts ‘a’ and ‘b’ on the x and y axes respectively but is parallel to the z-axis.

The ratio of the intercepts is a:b: ∞.

Coordination number: – The number of equidistant nearest neighbours that an atom has in the given structure.

Coordination No. of a simple cubic lattice is six.  Eg. Only polonium at a certain temperature exhibits these structures.

In a face-centred cube or FCC, there is one atom at the centre of each of the six faces of the cube in addition to the eight atoms at the eight corners of the cube.  Each atom in the centre of the face is shared equally by two cubes.  Hence, one half of the mass of the atom belongs to the unit cell.

The coordination number of this structure is 8.

X-rays are produced in a Coolidge tube. It contains a tungsten cathode (c) which is concave in shape which emits electrons when heated electrically. These electrons impinge on an anticathode (T), whose front face is inclined to an angle of 450 to the axis of cathode rays and give rise to x-rays.

The anti-cathode should have following properties.

1) High melting point to with stands the high temperature developed due to the conversion of the energy of the impinging electrons into heat.

Hence, heavy hard metals like platinum, tantglum and tungsten are used as anticathode materials.  The tube is evacuated to a pressure of 10-3 mm of Hg. A high potential difference of the order of 40,000 V is applied between cathode and anode.

2) The penetrating power of X-rays is very high.

3) X rays do not possess any charge, & hence they are not deflected either by an electric field or by a magnetic field.

The condition for a reflection to give constructive interference depends on the interplanar distance d, angle of incidence θ of x-rays, the equation that relates these variables is known as Bragg’s equation.

Consider the parallel equidistant planes of atoms ions or molecules with interplanar distance d as shown in diagram.

A parallel beam of monochromatic x rays (AB and DG) of wavelength ⋋ strikes these planes at ∠θ.  The wave AB and DG are in phase before striking planes, after striking successive planes the waves are considered to be reflected with an ∠θ of reflection which is equal to that of incidence ∠θ.  As explained above for constructive interference it is necessary that the waves reflected from successive planes should be in phase.

Consider the waves from plane (I) and (II), the initial parts of the two waves AB and DG were in phase before reflection.  The wave reflected from plane (II) travelled a greater distance than the from plane (I).  However, the parts of the reflected rays BC and HF must be in phase to give constructive interference.  This means that extra distance which the wave (2) travelled must be equal to either a whole wavelength or some integral number n of the ⋋ of incident x-rays.

According to the above diagram the path difference

This is known as Bragg’s equation

Where, n is an integer called order of reflection.

The reflection angles and the intensities of the reflected beams corresponding to these angles can be determined with the help of Bragg’s X ray spectrometer.

From Bragg’s equation we have n⋋ = 2dsinθ.  The X-rays are diffracted at the lattice planes and the reflection angle θ is measured using X-ray spectrometer.

Structure of NaCl and KCl

The Avogadro’s number (NA) is the number of molecules in one gram-mol of a compound.  Its value is 6.023 x 1023 molecules mole.

The unit cell of NaCl consists of eight simple cubes which amount for 14 Na+ ions and 13 Cl– ions.

i) There are 8 Na+ ions at the 8 corners of the unit cell and one Na+ ion at the centre of each of the 6 faces.

ii) The Na+ ion at the centre of each 6 faces is equally shared by other two adjoining unit cell.

Hence, ½ of the mass of the Na+ ion belongs to the unit cell.

∴ A unit cell of NaCl contains 4 molecules of NaCl.

Calculation of Volume of Unit cell