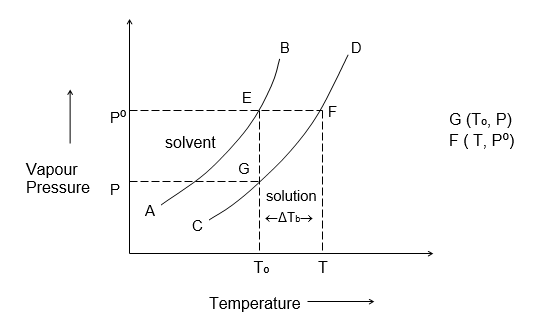 When a non-volatile solute is dissolved in a solvent, the vapour pressure of the solvent is lowered.

According, to Raoult’s law, the partial vapour pressure ‘P’ of a constituent of a liquid solution is equal to the product of its mole fraction ‘X1’ and its vapour pressure in the pure state.

Since X1 in any solution is less than unity, ‘P’ must be less than ‘Po’

The dissolution of a solute in a solvent leads to lowering the vapour pressure of the latter below that of the pure solvent.

Where, X2 is mole fraction of solute.

The relative lowering of vapour pressure is given as,

Thus, the relative lowering of vapour pressure is equal to the mole fraction of the solute in the solution.

The relative lowering of vapour pressure is totally independent of the nature of solvent or solute but depends only on the amount of solute in a solution and hence, a colligative property.

Thermodynamically relation between the elevation in the boiling point of the solution and the molecular weight of non-volatile solute dissolved.

If external pressure is Po then the solvent boils at To. The solution, however, attains this pressure Po only at temperature T.

The boiling elevation of the solution ΔTb is given as.

By applying the Clausius Clapeyron equation, we have,

If ‘n1’ is no. of a mole of solvent & ‘n2’ is the number of moles of solute, then the mole fraction of solute is given as,

Where W1 & W2 are weights & M1 & M2 are the molecular weights of solvent & solute respectively.

Molality ‘m’ is the number of moles of solute dissolved in 1000 grams of the solvent.

Since W1 g of solvent contains W2/M2 moles of solute

The relationship between depression in freezing point of the solution and molecular weight of Non- volatile solute dissolved.

The freezing point of the liquid is defined as the temperature at which vapour pressure of the liquid becomes equal to that of solids under one atmospheric pressure.

Substituting for X2 in equation (5) we get.

Osmosis is a phenomenon that refers to the movement or passage of solvent molecules from the pure solvent into a solution or from a dilute solution to a concentrated solution by a semipermeable membrane.

A semipermeable membrane is a membrane that is permeable to solvent molecules, but not to the solute particles

It is the pressure that must be applied to the solution side to stop the inward flow of solvent.

Consider the pure solvent in compartment I is at constant T and not subjected to any pressure change of solute addition.

The solvent in the solution of compartment (II) is at constant ‘T’ but subject to the addition of a solute and a ‘P’ change.  The free energy changes due to of mole fraction ‘XA’ and pressure change ‘dp’ is given as.

Integrating eq. (V) between limit XA = 1 to XA pressure Pinitial and Pfinal respectively we get.

Equation (XI) is valid for dilute solution only.

Molar mass of solute from osmosis

By measuring ‘π’, the molar mass can be calculated.

When two solutions have the same osmotic pressure at a given temperature, they are said to be Isotonic pressure.  They are of equimolar concentration.

Ideal behavior = no association and dissociation.

When solute particles, neither dissociates and associates. E.g. Urea in water.

The expression of different collective properties is valid for a dilute solution.  Hence it is possible to calculate the molecular weight of different solutes by experimentally determining the magnitude of the colligative property for a solution containing a known amount of solute.  However, the molecular weight of the solute determined is found to be the same as the expected value for it is an abnormal value.  The reason for such abnormality is as follows,

The same solute like acetic acid, and benzoic acid when dissolving in a solvent like benzene, carbon tetrachloride exists as a dimer in solution. Such association reduces the number of particles in the solution.  Thus the value of the colligative property which depends upon the number of particles is found to be less than the theoretical value.  As a result molar mass calculated is much higher than expected.

n = no. Of particles produced during associating.

II. Vant’s Hoff factor (i) and degree of dissociation of solute in solution.

Let an electrolyte Axy undergoes dissociation which is represented as-

Z+ and Z- are charged on cation and anion respectively.

If ‘C’ molar concentration of electrolyte and ‘∝’ degree of dissociation, it follows that at equilibrium.

Let the association reaction of solute ‘A’ can be represented as

There is a total of four colligative properties:

Do colligative properties depend on the number of particles?

Yes. Colligative properties depend only on the number of dissolved particles in the solution and not on their identity.