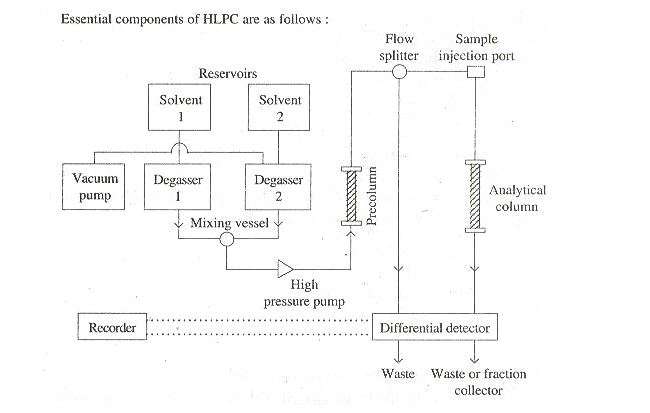 High-performance liquid chromatography or high-pressure liquid chromatography ie. H.P.L.C. is an improvement of classical column liquid chromatography. In classical methods, the liquid mobile phase flows slowly by means of gravity through a relatively large diameter column packed with a stationary liquid phase, which is immobilized on the surface of solid-like alumina, get, etc. of different mesh or particles size. The classical method is time-consuming and tedious and is generally characterized by low column efficiency and long separation time. In HPLC this efficiency of separation is improved by using a high-pressure pump that is capable of producing pulse-free inlet pressure of 1000 – 6000 psi.

A column is a narrow-bore metal stainless steel tube containing small spherical and uniformly size particles (5 um – 50 um) of stationary phase. Because a greater surface area of the stationary phase is exposed to sample components in the HPLC column than in traditional LSC. LLC and ion-exchange column the efficiency of HPLC is thus high resolution and high-speed liquid chromatography.

The other important condition is that a suitable immiscible solvent pair must be available. Generally, the two made the stationary phase and the other is the mobile phase

The sample was introduced into the column stationary liquid phase by means of the pressurized flow of the liquid mobile phase. The components in the sample are fractioned during their passage through the column. The detector system senses these components as they are eluted from the column and generates a signal proportional to the number of solutes passing through the system.

The important components are as follows:-

A typical HPLC unit is shown in fig.

A modern HPLC apparatus is equipped with one or more glass or stainless steel reservoirs each of which contains 1 to 2 dm3 of a solvent. The reservoirs are equipped with degassers to remove trapped or dissolved gases ( ) which otherwise interfere with the analysis by forming bubbles in the column and detector system. Degassers may consist of a vacuum pumping system and a distillation system for heating and stirring the solvent.

If a single solvent of const. Composition is used for separation it is termed isocratic elution and if two solvents are used it is called a gradient elution. Modern HPLC is often equipped with proportionating valves that introduce solvents from two or more reservoirs in the mixing chamber at rates that vary continuously.

The requirement for an HPLC pump includes.

Pumps are designed to operate at a const. Pressure diff. Types of pumps are a) screw-driven pumps and b) Reciprocating pumps.

Columns are typically 10 to 30 cm in length and 4 to 10 mm in diameter and are made up of stainless steel or glass.

Porous Solids adsorbents like silica gel and alumina are often preferred for the separation of compounds of relatively low mol. Wt. and polarity.

In this type, the material called Pellicular particle is used. It is made up of glass beads of a diameter of about 40 um coated with a thin layer of porous material like silica gel alumina or ion exchange resin.

A chromatographic detector is a device, which indicates the presence and measures the number of separated components in column effluent. The choice of the detector depends on the type of sample solution used. The basis of detection is UV, IR adsorption fluorescence refractive index polarography, etc.

(i) They have a wide linear range.

(iii) They can be used for gradient elution. (iv) They are commercially available.

All Refractive index detectors are highly temperature-sensitive and are general rather than selective.

The function of the recorder is to record the chromatogram of the sample.

The sample is injected into the column by means of a hypodermic spring. Through a self-sealing Teflon septum. While passing through the column. The components in the sample are fractioned. In the detector system, these components have eluted from column generation a signal proportional to the amt of solute passing through the system. This signal is then fed to the recorder, which records the output in terms of the chromatogram.

Compare And Contrast GC And HPLC

From the viewpoint of speed and simplicity of the equipment, GC is preferred. For the isolation of non-volatile substances including inorganic ions and thermally unstable material, HPLC is preferable whereas GC is not. Both the techniques as a matter of fact are complementary, efficient, and highly selective needing small ample which can be handled by nondestructive testing and are applicable for qualitative analysis.

In gas chromatography, org compounds must have an appreciable vapour pressure before this tech can be applied to their separation. This limits GC to approximately 60 % of the known organic compounds. HPLC tech, in contrast, does not have this kind of requirement and is for all practical purposes, suitable for organic molecules.

HPLC is thus most versatile in comparison to another chromatographic method.

Following are the advantages of HPLC over conventional column chromatography,

Advantages of HPLC over GC

Following are the advantages of HPLC over GC-

What is the full form of HPLC? or HPLC is an abbreviation for?

HPLC is an abbreviation for High-Performance Liquid Chromatography.

Chromatography is a separation technique whereby the components of a mixture may be separated by allowing the sample or analyte to pass over the material called a stationary phase by a moving phase called a mobile phase.  If the individual components of the mixture move at different rates then the separation will occur and the degree of separation the difference in migration.

What is the High-Performance Liquid Chromatography (HPLC) used for?

HPLC is an improvement of classical column liquid chromatography.HPLC is used for quantitative analysis of organic substances.

What is High-Performance Liquid Chromatography (HPLC)? and its principle?

How many types of HPLC exist?

What is the HPLC stationary phase?

A column is a narrow-bore metal stainless steel tube containing small spherical and uniformly size particles (5 um – 50 um) of stationary phase. Because a greater surface area of the stationary phase is exposed to sample components in the HPLC column than in traditional LSC. LLC and ion-exchange column the efficiency of HPLC is thus high resolution and high-speed liquid chromatography.

What is the mobile phase in High-Performance Liquid Chromatography HPLC?

In HPLC the mobile phase is the solvent that moves through the column.