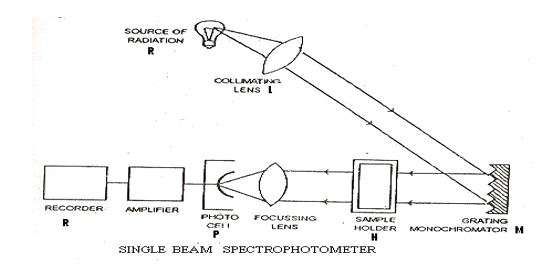 A colorimeter is used for quantitative analysis of solution on basis of colour intensity.

In a photoelectric colorimeter (or filter photometer), the photoelectric cell is used to measure the intensity of transmitted light. A narrow band of wavelength is obtained by passing visible light through a colour filter & is not strictly monochromatic, which is used as incident radiation.

Photoelectric colorimeter, in general consists of the following components.

i. Source of visible radiation (s): The wavelength of the range of visible light lies between 400-and 750nm. i) In this region, tungsten filament lamp is the most widely used Mercury vapors lamp or hydrogen discharge lamps are also used. The beam of radiation is collimated by a lens (L).

ii. Optical filters: A filter is used to select a narrow band of wavelength to an incident on the sample. Filters are of two types.

a. A glass filter, that consists of the thin filament of gelatin containing different dyes or coloured glass.

iii. Sample holder or Cuvette: The solution to be studied absorptiometrically is kept in the sample cell or

holder or cuvette. These cells are made up of glass.

iv.     Detector: The transmitted beam is focused on photoemissive cells or photomultiplier tubes or

photovoltaic cells, which act as a detector. The detector converts the transmitted beam emerging from the sample into an electric current.

maybe shown on a dial or in digital form.

Photoelectric colorimeters are of two types

The beam of light after passing through the lens and filter split into two beams; one passes through the blank and the other through the sample solution. The detector measures the difference in the absorption of light by the two and so gives the optical density of solute directly.

Arrangement and function of components:

i.  Light from sources (such as incandescent tungsten lamps), passes through a collimating lens.

ii.  Light is then incident on properly selected filters, which allow only a narrow band of

wavelength to pass through.

iii.  Light beam emerging from the filter incident on the mirror which split the beam into two.

iv.  One beam of light passes through the cuvette containing solvent (or blank) and then to

v. The Second beam of light passes through the sample solution and then to another photovoltaic cell.

viii. Depending upon the magnitude of the currents, a potential gradient is set up across AB and CD

ix. A sensitive galvanometer connected across the resistances serves as a null indicator. A null

indicator in the galvanometer indicates that the potential at the two contact points on AB and CD are the same.

What is a spectrophotometer?

Spectrophotometers allow a continuous choice of wavelength range covered in the spectrometer from 200-800nm. It employs prisms of grating, which make light perfectly monochromatic. Spectrophotometer, in general consists of the following components.

They are of two types

These contain a prism as the dispersing element. The function of the prism is to resolve radiation from the source into its component wavelength & to provide for the isolation of radiation of very narrow bandwidth. Radiation from the source is focused on the entrance slit & then collimated by a collimating lens. The collimated beam falls on the prism, which can be mechanically rotated so as to allow only a particular portion of the spectrum, produced by the prism to fall on a focusing lens & emerge from the exit slit. The exit slit width control bandwidth of emergent radiation, since dispersion is greater for shorter wavelengths & decreased with a longer wavelength.

For the visible region, prism & lenses made of glass are used & for the ultraviolet region, quartz prism is used.

The function of the diffraction grating is to get a monochromatic beam of a smaller bandwidth. The grating monochromators are prepared by drawing closely placed equidistant parallel lines on the glass surface or on a metallic surface.         In reflection grating, light radiation incident on each groove is diffracted out over a range of angles & in certain direction reinforcement & interference occur. This can be represented by using the grating formula. n=b(Sin  i + Sin r)

Where “b” is the distance between adjacent grooves & “i” is the angle of incident, “r” is the angles of diffraction & “n” is an order of the spectrum. The above-mentioned equation can only be satisfied for a single wavelength at a time.

Rotation of grating to change the angle of incidence (i) will bring each wavelength in turn to position to satisfy the equation. As a result of this, a monochromatic beam is obtained.

The solution to be studied absorptiometrically is kept in a sample cell holder or cuvette. These cells are made up of glass for the visible region & are made up of quartz for ultraviolet region study since glass absorbs ultraviolet light.

5.  Recorder: Output of detector is displayed as optical density or percentage transmittance. Display may be shown on the dial or in digital form.

Spectrophotometers are of two types:

i. Light from source ( R ) (such as incandescent tungsten lamp or hydrogen discharge tube) is focused by field lens to an entrance slit and is incident on the objective lens.

ii. Parallel beam of light then focuses on a grating monochromator ( M ) where after reflection produces an interference pattern which results in the dispersion of light into its component wavelength.

iii. To obtain the desired wavelength, the grating can be rotated by means of wavelength cam, thus monochromatic beam of light emerges from the exit slit.

iv. These monochromatic beams of light then passes through cuvette (c) containing solvent or sample solution.

v. The transmitted light fall on a photoelectric cell (P), which converts radiant energy into an electric signal that can be read on a meter calibrated in 0-100%  transmittance and absorbance scales.

The drawback of spectrometer:-

The beam of light after passing through the lens & grating split into 2 beams; one passes through the sample solution. The detector measures the difference in the absorption of light by the two & so gives the optical density of solute directly.

a. Absorption spectrum recorded on a spectrophotometer can furnish important information about the chemical constitution of the compound. E.g. Absorption at 254 nm shows the presence of an aromatic ring in the compound.

b. In quantitative analysis, it is used for the estimation of the number of metal ions like Fe & Mn at ppm-level. It is also used for the determination of fluoride ion, chloride ion & phosphate ions.

c. It is commonly used for the estimation of drugs and vitamins. E.g. vitamins B12 are estimated by the spectrophotometer method.

e. It is used in the determination of the dissociation constant of organic acids & bases.

Spectro photometry is of much use in elucidating the structure of organic molecules. A plot of absorbance versus wavelength is called absorption spectrum. From the absorption spectra in ultraviolet radiation, qualitative information about the functional group, such as carbonyl, nitro & amino can be obtained. This information is used to identify organic compounds.

The absorption spectrum of tyrosine was found to be similar to phenol, confirming structure (2) for the amino acid tyrosine.

g. Structure of inorganic complexes: Spectrophotometry has been used in the study of complexes.

ii) Octahedral-Planner Equilibrium: The change in colour of cis-[Ni(triethylenediamine)(H2O2)]+2 from blue to yellow on adding inert salt to the solutions has been shown from absorption spectra by Jorgensen to involve an octahedral planner equilibrium.

h. Job’s method to determine the metal-ligand ratio in complexes

The molar ratio of metal to the ligand in a coordination complex can be found using Job’s method of continuous variation.

The determination of the amount of substance in a solution by a colorimeter or spectrophotometer usually involves.

The concentration of the solution (or substance) is determined by using a calibration curve as follows:

The multiplication factor is the concentration of a solution that gives unit absorbance. First standard

colorimeter or spectrophotometer. From the concentration & absorbance, the multiplication factor is

The concentration of an unknown solution can be found from its absorbance. i.e. unknown concentration = Absorbance X multiplication factor.

(ii)  Identification of structural groups in a molecule :

The structural groups can be identified using the characteristic λmax value. Generally, spectral details like λmax molar absorptive etc. of the unknown compounds are compared with the data of the known compound.

To find out λmax for the given material series of standard solutions is prepared. A series of calibration curves are plotted in terms of absorbance versus concentration.

Distinguish between Colorimeter and Spectrophotometer

What is principle of UV Visible Spectroscopy?

What are the application of UV Visible Spectroscopy?

What is the principle of the single beam spectrophotometer?

What is the principle of the double beam spectrophotometer?

The beam of light after passing through the lens & grating split into 2 beams; one passes through the sample solution. The detector measures the difference in the absorption of light by the two & so gives the optical density of solute directly.