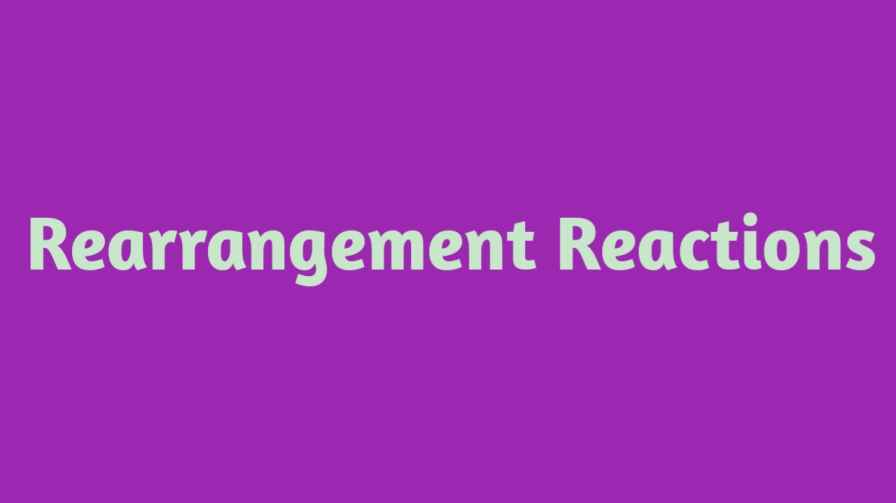 The reactions involving the migration of an atom ( like H) or group (like methyl, ethyl, etc) from one atom to another (i.e. change in the bonding sequence within a molecule) are known as molecular rearrangements or rearrangement reactions.

These rearrangements are roughly classified on the basis of the nature of the migrating group/atom,

i. Nucleophilic or Anionotropic: migrating group migrates with its electron pair.

iii. Free radical migrating group: migrates with only one electron.

But most commonly found are Nucleophilic or Anionotropic.

a) The First step is the generation of the electron-deficient center of the molecule. As the migrating group migrates with electron pair, the migration terminus must have an incomplete octet. This can be obtained in two ways, i. Through carbocation: Carbocations can be formed in various ways. The most common is dehydration of alcohol. This step is similar to that of the SN1 or E1 reaction.

c) In the third step, the newly formed electron-deficient center acquires an octet either by accepting a nucleophile or excluding a proton. It is observed in many cases that either two or all three steps take place simultaneously. As seen in many cases SN1 type of the first step is commonly followed by rearrangement to give a more stable species.

It is observed in many cases that either two or all three steps take place simultaneously. As seen in many cases SN1 type of the first step is commonly followed by rearrangement to give a more stable carbocation. It is proved by the fact that the rate of reaction increases with the ionizing power of the solvent and it is unaffected by the concentration of the base. It has been shown that the rate of migration increases with the degree of electron deficiency of the migration terminus.

Rearrangements are divided into two types

Some general but important trends in the migrating aptitude of different groups. Aryl groups exhibit a higher propensity for migration than that alkyl groups. The migratory aptitude of hydrogen is unpredictable. Hence, the mixture of migrated products is obtained. In the case of aryl groups, those with electron-donating substituents at the meta or para positions migrates preferentially over those containing substituents at the ortho position. Aryl group containing electron-withdrawing groups shows reduced migratory aptitude.

You can click on the names mentioned above to know the principle and the mechanism of these reactions in detail. All the above reactions are explained broadly to understand the concept easily.

2. Wohler’s synthesis of urea from ammonium cyanate is also an example of a rearrangement reaction.

a. In which reaction(s) migrating group migrates to an electron-deficient nitrogen atom?

b. In which reactions rearrangement of the carbon skeleton of the substrate is possible?

Rearrangement of the carbon skeleton of the substrate is possible only in the reactions which involve the formation of a carbocation.

c. Which types of isomers are formed in rearrangement reactions?

Structural isomers because products formed have the same molecular formula, but their atoms have different arrangements or bonds.

d. What are addition reactions?

A reaction in which two or more molecules combine with one another to form a larger molecule with no additional products is called an addition reaction. Example polymerization.