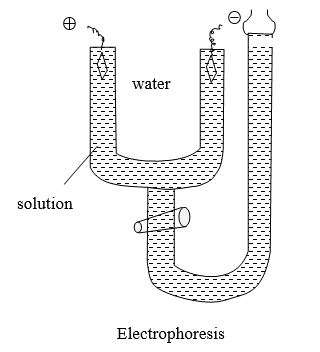 wileetakkar@gmail.com January 14, 2022 9 Comments
Spread the love
Contents hide
1 Classification of Colloids
1.1 Lyophobic Colloids (Solvent hating)
1.2 Lyophilic Colloids (Solvent loving)
2 Origin of charge on colloidal particles:- Reason for the charge on colloidal particles
2.1 Self dissociations
2.2 Medium/PH of the solution
2.3 Preferential adsorption
3 Helmholtz Electrical Double Layer
4 Stern’s Theory
5 Electrokinetic Phenomena
6 Electrophoresis
7 Electro osmosis
8 Colloidal Electrolyte [formation of Micelles]
9 Sedimentation (DORN EFFECT)
10 Streaming Potential
11 Donnan membrane equilibrium
12 FAQs
12.1 What are the properties of colloids?
12.2 What are the types of colloids?
12.3 What is colloid with an example?
12.4 What is the size of colloidal particles?

In this type, the affinity between the dispersed phase and the dispersion medium is very small. Hence these solutions are called solvent hating, these are relatively unstable compared with lyophilic solutions. They can be easily coagulated and it is difficult to get back to the coagulated dispersed phase in the colloidal state. Thus they are irreversible colloids.

In this type, there is a considerable affinity between the dispersed phase and dispersion medium.  Hence these solutions are called solvent-loving.  The coagulation is not as easy as that of a lyophobic solution.  Hence they are more stable & are reversible colloids.

The particles of soap, detergent, etc. possess a charge due to self-dissociation.  The soaps are Na+ or K+, Salt of long-chain fatty acids, they dissociated in solution giving ions.

The anion (R – COO–) has a strong affinity for each other, therefore, these ions aggregate colloidal particles.

The charge on colloidal particles is due to the medium in which they are present. e.g. Protein.

Amino acids are the building units of protein in an acidic medium, –the NH2 group accepts a proton from acid and becomes positively charged.

In the basic medium the –COOH group donates a proton and becomes negatively charged.

The adsorption of certain kinds of ions from the dispersion medium on the colloidal particle is also one of the reasons for the existence of charge.  The type of charge depends on the way by which the solution is prepared.

Oppositely charged ions present in the medium. The electrical potential corresponding to such a charge distribution is also shown.

Such double layers are supposed to exist not only on plane surfaces but also surrounding solid particles suspended in a liquid medium.  The value of potential developed between the surface and fixed layer in solution is termed as zeta potential given by,

Helmholtz’s model of the double layer is found to be inadequate since the thermal motion of the liquid molecules could rarely permit such a rigid placement of charges at the interface.  Much more reasonable therefore it is diffused double layer proposed by the stern.

This model assumes that ions are held in an immobile manner even though they are present in Solution it does not take the mobility of particles in a liquid medium.  The fall of potential as moved away from the surface is linear and abrupt zeta potential is measured between the surface and 1st layer (fixed layer) it cannot be used to explain electrokinetic phenomena.

ii) The second part extends some distance into the liquid phase and is known as diffused.

In this part, the movement of the particles is free due to thermal agitation.  The distribution of positive and negative charges is not uniform here so the whole potential difference between the colloidal particles and the dispersion medium consists of two parts.

Thus, the after-potential difference is known as electrokinetic potential or zeta potential.

where ℓ = thickness of the double layer

Thus be designed as the potential difference between the solution (Colloid) particles and dispersion (solvent ions) medium.

where n= viscosity of the medium

D = dielectric constant of the medium

The surface behavior can also be studied by changing the PH, and ionic strength of the solution.  Zeta potential (ζ) & electrophoretic mobility (μ) are related by this equation.

Where r = radius of the capillary

D = dielectric constant of the medium

Potassium Oleate is a typical example of a class of compounds known as colloidal electrolytes or association colloids.

If potassium Oleate is added to the small increasing amount of water at 323k, it dissolves in water and forms K+ and Oleate ions.

The surface tension of the solution continuously decreases from that of pure water and the solution behaves like any other strong electrolyte in that the molar conductivity is a linear function of the square root of concentration.

The colloidal aggregates formed in the solvent are referred to as micelles.

The concentration at which micelles appear is called the Critical Micellisation Concentration (CMC).

The change from ions into Micelles is reversible and the Micelles can be destroyed by diluting the solution.

The accepted structure of  Micelles is an approximately spherical body, with hydrophilic groups on the surface and hydrophobic groups directed towards the interior.

Sedimentation potential is opposite to that of electrophoresis.  It is an electrokinetic phenomenon.  Colloidal Solutions are fairly stable, if they are kept for a long time under the influence of gravity the particles start moving downward.  It is a very slow process, the heavier particles get distributed downward and the lighter particles upward.  Such movement  & distribution of colloidal particles under the influence of gravity is known as sedimentation.  The potential difference developed between the lower layer and the upper layer is known as sedimentation potential.  The effect was observed by Dorn, hence it is known as Dorn Effect at different layers. Introducing suitable electrodes at different layers.

The potential developed when a colloidal solution is forced to pass through a porous membrane or capillary is known as streaming potential.

The streaming potential is measured by keeping two calomel electrodes on the two sides of the Porous membrane.

Where, η = Viscosity of Soln,

D = Dielectric constant of the solution

At equilibrium, let a certain amount x of sodium and chloride ions pass and the concentration is known from thermodynamics that at equilibrium. The chemical potential of sodium chloride present on both sides of the membrane must be the same  and the  chemical potential of  any substance in terms of its activity ‘a’ can be represented in terms of concentration for dilute solution (a = c)

∴ equation (1) can be written as

For dilute solutions, the ionic activity may be replaced by the corresponding concentration.

For this eqn, the fraction of NaCl that has diffused through the membrane, when equilibrium is attained, depends on C1, i.e. the Concn of Nap is C1 is large the fraction diffused would be small .when C1 is small as compared to C2 .

The equation is known as Donnan membrane equilibrium.

What are the properties of colloids?

What are the types of colloids?

What is colloid with an example?

What is the size of colloidal particles?