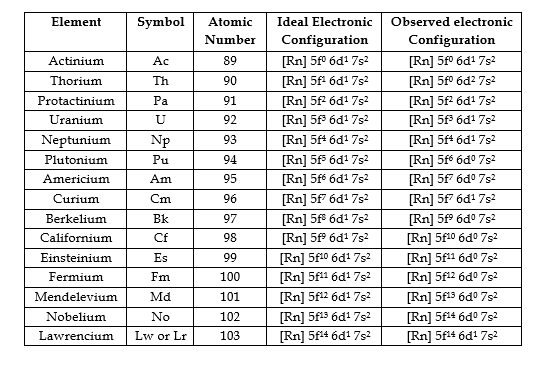 The elements that have incompletely filled (n-2) f orbitals in their ground state or in any of their oxidation states are called f-block elements or inner transition.

What are Lanthanides or Lanthanons or 4 f block elements? Explain its position in the periodic table

A separate position for each lanthanide element was not possible as it would lead to sidewise expansion and destroy the symmetry of the main periodic table. Moreover, the elements with similar properties could not be grouped together.

What are Actinides or Actinons 5 f block elements? Give its position in the periodic table

The actinides series is placed in a row below the periodic table. The actinides series consists of 14 elements which start from thorium (90) and end with Lawrencium (103). Since the elements follow Actinium in the periodic table they are called Actinides or Actinons. In these elements, the differentiating electron enters a 5f orbital, hence these elements are also called 5f block elements.

A separate position for each Actinide element was not possible as it would lead to sidewise expansion and destroy the symmetry of the main periodic table. Moreover, the elements with similar properties could not be grouped together.

How are f-orbitals labeled based on the magnetic quantum number?

There is a tendency for the 5d electron to drop to the 4f level because of the special stability of the half-filled and completely filled sub-level. Thus there is a tendency to achieve 4f7 and 4f14 arrangements as soon as possible and indeed these arrangements are achieved at Europium and Ytterbium before the mid-point and end of the series respectively. However, the shifting of 5d1

electron to 4f orbital is not observed in Gadolinium and Lutecium. This tendency of retaining 5d1 electrons is due to enhanced stability associated with the half-filled and completely filled 4f-orbital in Gd and Lu respectively.

iv) The difference between the ideal and observed electronic configurations is the presence or absence of 5d electron. The 4f and 5d levels are so close in energy that it is very difficult to locate the exact position of the electron.

Explain the electronic configuration of the f block elements, Actinides

iii) Similarly in Actinides also after Actinium, the 5f orbitals would become lower in energy than the 6d orbitals. Thus the electrons should enter the 5f-orbitals. However, for the first four elements Th, Pa, U, and Np the difference in energy between 5f and 6d orbitals is small.

Thus in these elements electrons may occupy the 5f or the 6d levels or sometimes both. Later in the actinide series, the 5f orbitals do become appreciably lower in energy. Thus from Pu onwards the 5f shell fills in a regular way i.e. 6d1 electrons get shifted to 5f orbitals. The shifting is not seen in Cm and Lw because in Cm shifting gives unstable configuration [Rn]5f8 6d0 7s2 while in Lw the shifting of 6d1 electron to 5f orbitals is also not possible since 5f orbitals are already having 14 electrons.

i) The most common and stable oxidation state of lanthanides is +3. The +3 state arises due to the loss of two electrons from the 6s orbital and one electron from the 5d or 4f orbital. The sum of the first three ionization energies is rather low.

iii) Some lanthanides show anomalous oxidation states of +2 and +4 even though they do not achieve stable, f0, f7, or f14 electronic configuration.

IV) Thus from the above discussion it is clear that although special stability is associated with empty, half-filled, and completely filled f-sub levels as an important factor, there are other factors like thermodynamic and Kinetic which are equally important for determining the stability of various oxidation states.

Explain the Magnetic properties of Lanthanides

iii) When the magnetic moment of tri positive ions is plotted against atomic number then a dotted curve is expected with a single peak at Gd3+ (7 unpaired electrons) should have obtained but instead a binodial curve is obtained with two peaks one at Pr3+, Nd3+ and other at Dy3+, Ho3+ region. This unusual curve is mainly due to the combined contribution of spin and orbital moments of electrons.

Write a note on the ability to form complexes of lanthanides.

ii) The 4f electrons of lanthanides are much inside the atom and are well shielded by 5s and 5p electrons, hence 4f electrons hardly interact with the ligand field. Therefore ligand field stabilization energy is low and the complexes are less stable.

iii) In the complexes, the force of attraction between lanthanide ions and the ligands is mainly ionic.

A steady decrease in the atomic and ionic radii of lanthanides with an increase in atomic number is known as lanthanide contraction.

Consequences or effects of lanthanide contraction

Decreasing Basicity of the lanthanides, [M(OH)3]

Due to lanthanide contraction, the size of the +3 lanthanide ions decreases regularly with an increase in atomic number. As a result of a decrease in size, the covalent character between M3+ ion and OH- ion increases from La(OH)3 to Lu(OH)3. Therefore the basic character of the hydroxides decreases with an increase in atomic number. Thus La(OH)3 is the most basic hydroxide while Lu(OH)3 is relatively the least basic hydroxide.

These basicity differences are reflected in the hydrolysis of ions, the solubilities of their salts, the thermal decomposition of oxysalts, and the formation of complexes. It is due to differences in the above properties, the lanthanides can be separated by solvent extraction and fractional crystallization.

Variation in the properties of Lanthanides.

Similarities between Yttrium and lanthanides.

In group III B, the atomic and ionic radii increase regularly in the order of  Sc < Y < La. However, from cerium onwards there is a slight but steady decrease in the ionic size, so much that the ionic size of Holmium (Ho3+ = 0.089 nm) and Erbium (Er3+ = 0.088 nm) becomes equal to that of Yttrium (Y3+ = 0.088 nm). Thus, yttrium ion has charges and sizes similar to those of heavier lanthanides.

Similarities between Zirconium and Hafnium

In group IV B, the ionic radii is expected to increase in the order of Ti4+ < Zr4+ < Hf4+. But the ionic radius of Hf4+ (0.078 nm) is almost similar to that of Zr4+ (0.079nm). This similarity in ionic radii of Hf4+ and Zr4+ is due to the effect of lanthanide contraction on hafnium, which is the next element after lutecium. As zirconium and hafnium ions have similar charge and ionic radius, they have very much similar chemical properties and therefore are difficult to separate. Such a pair of ions is called a Chemical twin.

Similarly, there are other chemical twins like Nb-Ta, Mo-W, and Tc- Re having very similar chemical properties.

Due to the effect of lanthanides contraction, the atomic and ionic radii of post-lanthanides are very similar to those of the elements of the previous period. For example, Zr and Hf have similar sizes. But the atomic number and atomic weight of Hafnium are almost double that of Zirconium. Hence, the density of Hafnium is abnormally high. (Density of Zr = 6.59 g/cm3 and that of Hf = 13.3 g/cm3). Similarly, the other post-lanthanides, tantalum, tungsten, and rhenium have very high densities.

Give any two important minerals of lanthanides.

Give the Application of lanthanides

Lanthanides like Gd, Sm, Eu, and Dy are used as moderators and neutron absorbers in atomic reactors to control the rate of fission. Long rods made up of these materials are introduced into the core of a reactor before the reactor is fueled. After the addition of fuel, if some rods are withdrawn, the fission reaction begins and with the removal of more rods, the fission reaction accelerates.

If all the control rods are introduced in the core, the fission reaction stops. Isotopes of lanthanides have some potential use in atomic batteries, for the treatment of cancer, tracer’s studies, and sources of g -rays and X-rays.

Misch metal (Alloys of lanthanides) is a very good scavenger for oxygen and sulfur in several metallurgical operations. Misch metal has strong reducing properties. Magnesium alloys with misch metal and Zirconium possess high strength and resistance and are useful in jet engines. Misch metal also increases the resistance to nickel alloys and the working ability of stainless steel and vanadium.

Mixed lanthanides are added to zeolites to enhance the catalytic activity, especially in the cracking of petroleum.

Because of paramagnetic and ferromagnetic properties, lanthanides are useful in the field of the electronic industry. Ferromagnetic garnets, 3Ln2O3.5Fe2O3 are used in microwave devices and magnetic core materials.

Selenides and tellurides of lanthanides are used as semiconductors or thermoelectrics.

Europium-activated yttrium vanadate is used as red phosphors in colour television tubes. Some chelates of lanthanides are fluorescent or luminescent and may be useful in laser operation.

1. Metallic uranium and UC2 can be used as catalysts in the synthesis of ammonia by

2. Ferro-uranium alloy is used as the atomic clock which is a very accurate device.

3. UO2 is used in powerful incandescent lamps for movie picture projection in photography.

4. Uranium salts are used as mordants for silk, wool, and Calico printing.

5. Uranium borate improves the appearance and increases the tensile strength of rubber.

6. Uranyl nitrate is used in medicine as anti-diabetes.

7. The most important application of uranium is in atomic energy. Uranium is a source of vast reservoirs of energy, which is harnessed for constructive purposes by the controlled chain reaction in nuclear reactors. On the other hand as a result of a controlled chain reaction, the energy released is used for a destructive purpose, which is the principle of the atomic bomb.

What is the Differences between Lanthanides and Actinides?

What are f block elements?

The elements that have incompletely filled (n-2) f orbitals in their ground state or in any of their oxidation states are called f-block elements or inner transition.

What are lanthanides and actinides?

Actinides are f-block elements that lie in the 5f place in the periodic table.

What are lanthanides and actinides called?

Lanthanides are f-block elements that lie in the 5f place in the periodic table.